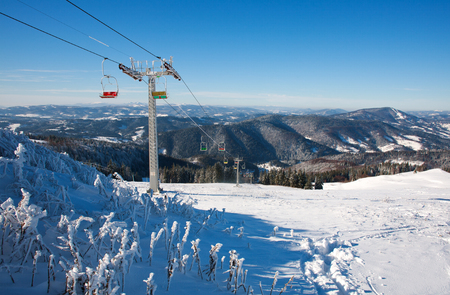 Riding a ski chairlift, tram or gondola is generally considered to be very safe but when a ski chairlift accident happens the injuries sustained can be very serious or even life threatening. Data from the National Ski Areas Association (NSAA) gathered since 1973 shows 12 deaths linked to chairlift malfunctions through the 2015/2016 ski season. Between 1973 and 2016 the industry gave approximately 16.7 billion lift rides to skiers, hikers, snowshoers and snowboarders. This data leaves us with a current annual fatality rate of 0.14 per 100 million miles traveled on ski lifts; far lower than annual fatality rates of riding an elevator or in a motor vehicle. There has not been a ski resort industry related fatality from a chair lift malfunction since 1993. In addition, U.S. fatalities on ski lifts are a fraction of those experienced on European ski resorts.

The following is a breakdown of ski lift fatalities from malfunctioning chair lifts suffered since 1973:

Year: 1985
Where: Keystone Resort, Colorado
Cause: malfunctioning lift due to welding failure on bullwheel
Fatalities: 2

Since 1972, 115 injuries caused by chairlift malfunctions in ski resorts around the country have been recorded by the NSAA. The most common cause of injury is chair rollback, responsible for 79 injuries. The next most common cause is de-ropement, responsible for 17 injuries. This is followed by cross-arm weld failure, 9; grip failure, 6; chair detachment, 2; and sheave failure 2.

Fatalities and injuries caused by falls from chairlifts

Since 2004, there have been three fatalities at U.S. ski resorts attributed to falls from chairlifts not related to technical or mechanical failure. It should be noted that many states do not require that falls from chairlifts be recorded so some instances may not be known. Colorado State, which sees more than one-fifth of all skier visits in the country, does require that all falls from ski lifts be reported to regulatory agencies. NSAA analyzed data gathered by the Colorado Passenger Tramway Board between the 2001/02 to 2011/12 ski seasons with the hope of gaining some understanding about why these falls occur. The causes reported for the falls were as follows: human error (86 percent), medical condition (4 percent), operator/mechanical error (2 percent), or unknown cause (8 percent).

Waiver of liability not valid in WA State

In Washington State, the waiver of liability signed by skiers and snowboarders before they head out on the slopes for the day is only valid for ordinary injuries such as a broken arm. Serious injuries that occur as a result of gross negligence fall outside of a waiver of liability.

If you or a loved one has been seriously injured at a ski resort due to the negligence of ski personnel or management or malfunctioning equipment, you may be able to recover damages through a personal injury case. Contact an experienced personal injury attorney as soon as possible; there is a statute of limitations on personal injury claims.