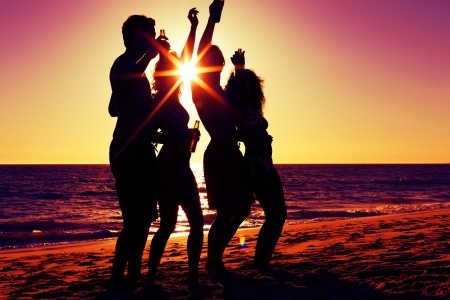 A Spring Break getaway is supposed to be fun but there are many risks for injury as students drink and party excessively. Sadly, Spring Break injuries have been on the rise in the last decade. Spring Break trips often coincide with DUIs and DUI related car accidents making the nine days of spring break a very dangerous time on the roads in destination towns. Spring Break partiers tend to be in their late teens and early twenties and as such are most likely to be involved in an accident.

Other accidents common during Spring Break include fights, diving and swimming accidents. Be prepared to be patted down for weapons at a nightclub.

Acapulco is a resort destination on Mexico’s Pacific coast. About 22,000 American students party in Acapulco during Spring Break every year. What draws Americans in such great numbers is the city’s many late night “discotecas,” or dance clubs.

Alcohol or food poisoning is all too easy in a place flowing with all-inclusive alcohol and unfamiliar food.
Petty crimes such as being robbed are very common. You should be aware that the police are not always on your side; arrests for small infractions are common.

The Mexican drug war has caused a rise in kidnapping, murder, rape, and assault so be on the lookout for dangerous situations and stick to tourist areas.

Look for Acapulco’s dedicated tourist police in place during Spring Break; they speak good English and are dressed in white and light-blue uniforms.

Cancun, Mexico is like Acapulco but on the Caribbean coast. Cancun is popular for its all inclusive resorts, night clubs, Mayan Ruins, sport fishing, and snorkeling.

Similar dangers exist in Cancun as they do in Acapulco.

Negril is Jamaica’s leading Spring Break destination with the focus on a well developed Seven Mile Beach. It’s an open resort which makes it authentic as you are close to the people but also opens the risks to tourists.

Dangers:
Petty crimes like robbery are common along Jamaica’s deserted roadways as police protection becomes thin; it is advisable to stay in the popular tourist areas.

Drugs are sold everywhere but if you’re caught buying you could be hauled off to jail and dealt a stiff penalty.

Panama Beach, Florida, is a hotspot for Spring Break fun, drawing thousands of students every year. Nightclubs and beaches abound.

Dangers:
In the last decade, there have been horrible acts of violence and tragedy in Panama Beach during Spring Break: a woman was shot, two people were stabbed with beer bottles during a Lil’ Wayne concert and others died in a horrible car crash.
Panama Beach is home to MTV Spring Break so be aware that your actions could end up on national television.
Beware of rip currents while swimming, and watch out for flags indicating that it is not safe to go into the water.

South Padre Island is a barrier island on the Gulf Coast of Texas. Its most popular Spring Break spot is Coca-Cola Beach, which is sponsored by the soft drink.

Crime is low in South Padre, compared to other spring break destinations and there is ample police to keep people in line. The main thing to remember is to stay on the island. Nearby Matamoros, a Mexican border town popular with students, has been named in a State Department travel advisory as an area that has seen increased violence from an ongoing drug war.

If you or a loved one were injured in an accident, get an accident attorney to fight for your rights. You could be eligible for compensation for your injuries. Please call the experienced Personal Injury lawyers at Tario & Associates, P.S. today!